Children and families go to the LEGO® World expo in Copenhagen in February 15-18 Denmark, and they will have the chance to make their brick-building dreams take flight with a flight of small drones created by the Human Media Lab at Queen’s University in Canada in collaboration with the LEGO Group’s Creative Play Lab. Visitors will be able to experience and play with new technology combining LEGO® bricks and drones. Children have a chance to arrange Lego elements whatever shape they want. With the help of small sensors and gyroscopes, the system also tracks when the children move, twist and bend their designs. The drones faithfully replicate any shape alterations as an in-air animation.
“At the LEGO Group, we continuously explore the opportunities offered by new technologies to create fun and creative experiences for children. We are happy to offer the visitors at LEGO World the chance to experiment with LEGO bricks and drones in collaboration with Queen’s Human Media Lab. While the technology is a playful experiment, and not a real LEGO product, it is a way for us to explore the boundaries of what can be done with a combination of technology, LEGO bricks and loads of playful imagination” indicated Tom Donaldson, VP of Creative Play the at LEGO Group.

According to the Dr. Vertegaal, head of the Human Media Lab and professor of Human-Computer Interaction at Queen’s University in Kingston, Canada “At the Human Media Lab, we believe this technology has the potential to take experiential learning to an entirely new level. We have created a technology that works to blend the digital and physical worlds together right before children’s eyes” 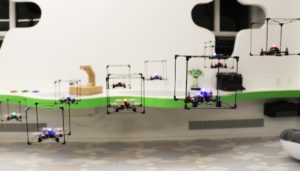 He believes that the drone technology could potentially unlock new realms of interactive teaching capable of providing children insights into the physical world. While currently at an experimental stage, Vertegaal sees a potential technology used in the future to teach young schoolchildren about physics.
Dr. Vertegaal compared this system with our galaxy: Milky Way and said “As an example, imagine us interactively reconstructing the movement of planets around our sun or distant stars in the Milky Way galaxy”. “With this technology, we are able to simulate the physics of the natural world like gravity, planetary orbits, and more, giving children a chance to see what they have long learned from textbooks and two-dimensional depictions, in a real physical environment.”