Space elevator will be created by a Japanese company by 2050. It will allow transferring humans cargos into space. The space elevator can reduce the cost of delivering payloads to space by 90% which will destroy the need for rockets. Cargo generally costs approximately 22.000$ per 1kg via rockets. But Using Obayashi’s space elevator the cost would be closer to 200$. It is also convenient for long-distance space travel. It comprises of a 96.000 km (60.000ml) long carbon nanotube cable. For instance, the international space station is 330 km away from Earth, and the Moon is 284,400 km away from Earth. Carbon nanotubes are stronger and lighter than any materials that we know. For example, when we compare the carbon nanotubes and steel cables, we surely can say that carbon nanotubes are nearly a hundred times stronger than the last. The cable could also be constructed from diamond. One end of the cable will be attached to Earth’s surface; the other end will be attached in space at an altitude of 36.000 km. The space elevator will be able to transport 100 ton climbers into space. It can deliver passengers into space about a week and passengers will disembark at the station.
Obayashi Corporation plans are supposed to begin by 2025. It will take 20 years to construct the cable. The elevator can provide hub for space exploration and boots space tourism. It is also supposed to provide cheap solar power. Unlike rockets, space elevators get their energy from Earth’s rotation. 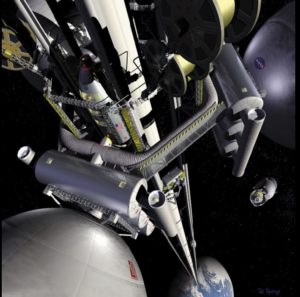