There is something new to realize. A startup that is called SpinLaunch in California wants to send payloads into space, and SpinLaunch raised $30 million found to develop operation. SpaceX spends approximately $62 million to launch its Falcon 9 rocket, while more powerful Falcon Heavy costs $90 million per launch. However, the price of single launch would be reduced to under $500,000. The company is planning to utilize large centrifuge spinning rate. All of its momentum will be harnessed to catapult cargo into space. If the momentum is high enough, the payload would be able to leave the atmosphere of Earth (probably at a speed of 4,800 km/h or more) on its own. Their aim of this idea is to make a sustainable and cheaper way to get things into space without using any chemical propellant. If it goes smooth, it would sidestep big private rocket companies such as Blue Origin and SpaceX that use expensive booster rockets with heavy fuel demands.

Once NASA tried to actualize such project and but they came to the thoughts that was not cheaper, but the SpinLaunch project suggests an alternative methods realizing this operation. It is true or not, we will find out in future when SpinLaunch will startup. In such way, the of path of space will be available. 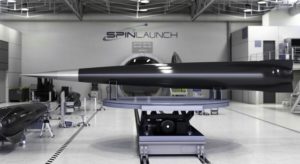