Starman and its Tesla disappeared in the Space when the battery died. Elon Musk, the founder, CEO and lead designer of SpaceX, sent up his own Tesla Roadster into the space. The powerful rocket SpaceX Falcon Heavy launched at 3.45pm EST (8.45pm GMT) on Tuesday. He named the mannequin Starman. The car was equipped with cameras so people could watch Starman’s journey live. A lot of the telescopes that have been following the Tesla and its passenger’s journey will soon no longer be able to see them, it is disappeared.  The Virtual Telescope Project, which has been tracking the spacefarer and its Tesla from the time they left the planet aboard the first Falcon Heavy launch. The Virtual Telescope project gives people a way to access several robotic telescopes in real time over the internet. 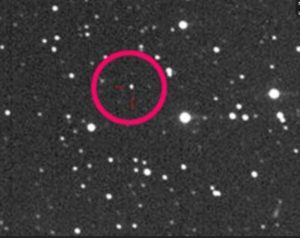 the image of Starman and its Tesla zooming across the sky, in particular, were and will be provided by the Tenagra Observatories in Arizona. The batteries that powered the system that captured Starman’s close-up videos already died 12 hours after SpaceX’s Falcon Heavy ferried it outside the Earth’s atmosphere. Instead, you’ll see a bright spot moving through lots of other brighter spot, like this above.